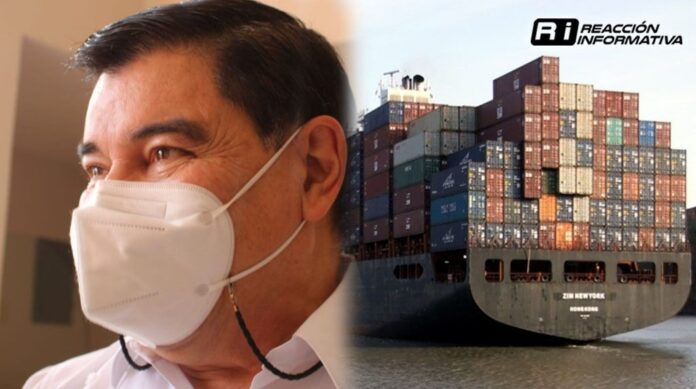 Lizárraga Mercado noted that this project that will connect the six States that make up the Northern Economic Corridor, now renamed the T-MEC Corridor

Mazatlán, Sinaloa.- Described as a national need, the now called T-MEC Corridor will include two more pharaonic projects; the construction of a cargo port next to its respective double-containerized railroad in Mazatlán, confessed the head of the Ministry of Economy, Javier Lizárraga Mercado.

He noted that this project that will connect the six States that make up the Northern Economic Corridor, now renamed the T-MEC Corridor, is a need that both Mazatlán and the country needed, since in addition to fulfilling “an old dream of more than 100 years ”, Will be working with a capacity of between 4 to 8 million containers.

“We presented what used to be the Northern Economic Corridor in a project that is now renamed the T-MEC Corridor; It is a reality that the port of Mazatlán, speaking of cargo, is already very congested, it is surrounded by the city, there is no way to grow ”, he commented.

“Faced with an imminent important project of a railroad that would be double containerized, it would break the Sierra Madre Occidental and connect in an old dream of more than 100 years to connect Durango, Torreón, Saltillo, Monterrey, in short, everything that is the Northern Economic Corridor ”, he specified.

He mentioned that during the most critical months due to the Covid-19 pandemic, container traffic was paralyzed around the world, giving as an example what happened in the ports of San Pedro and Long Beach, that is why they will seek to make this project have more transit capacity.

“We all saw with the problem of containerized products, the problem of the pandemic, logistics supplies at the world level, how they were delayed; There were more than 60 ships waiting to unload at the ports of San Pedro and Long Beach, this gives the idea that if a port in Mexico is already occupied2, (…) This new port would be built with a capacity of between 4 and 8 million of containers ”, declared Lizárraga Mercado.