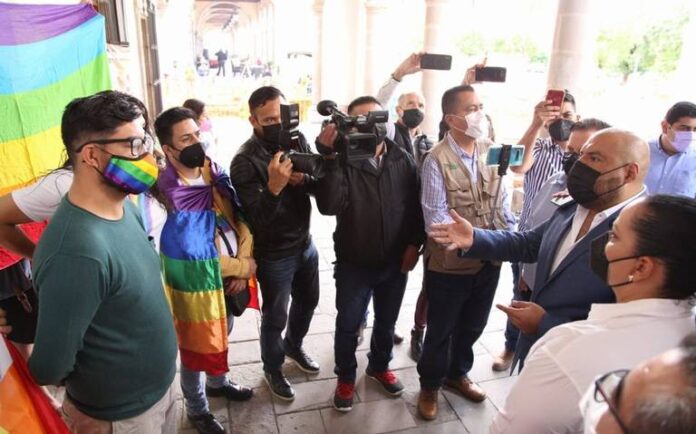 Iván Gurrola, expressed himself in favor of an extraordinary period to determine the voting of marriages between people of the same sex so that it is resolved in this legislature

Iván Gurrola Vega, president of the Political Coordination Board of the State Congress, affirms that he will ask the parliamentary groups of the PT, PAN, and PRI to put the issue of equal marriage into consideration in plenary session and vote as each one considers it, “We cannot ignore a reality that is experienced throughout the world,” he said. Later, he met with the LGBT community to explain the legislative procedure.

During the press conference, the Morena legislator respectfully asked the parliamentary groups of the National Action (PAN), Institutional Revolutionary (PRI) and Labor (PT) Parties, to accept a new extraordinary period and to start consideration of the plenary session the initiative of equal marriages, there each one will vote as they consider.

He indicated that the positions of the PAN and PRI parliamentary groups are against equal marriages, “but we cannot be ignored in the face of a reality in the country and in the world, it is a requirement of the Supreme Court of Justice of the Nation. (SCJN) and refusing to discuss the issue, goes against a right, “he said.

He explained that tentatively next week the Permanent Commission meets and an extraordinary period may be proposed to discuss only the issue of equal marriage.

He considered that the PT could be an ally of the Morena in this matter, however, they will be respectful of his decision.

He indicated that the groups may ask the PAN and the PRI to allow the proposal to be voted on.

Moments later, Iván Gurrola Vega, received the LGBT community in the offices of the State Congress, to explain the reason why there has been no progress on the initiative on equal marriages. It only remains for the parliamentary groups of the PAN and the PRI to express themselves in favor of starting the work in the Permanent Commission and calling an extraordinary period with which they can define on this issue.

He also announced that he has already met with elected deputies from Morena to seek their support, “we want the double-standard speeches to end, as is the case with the PAN and PRI benches.”