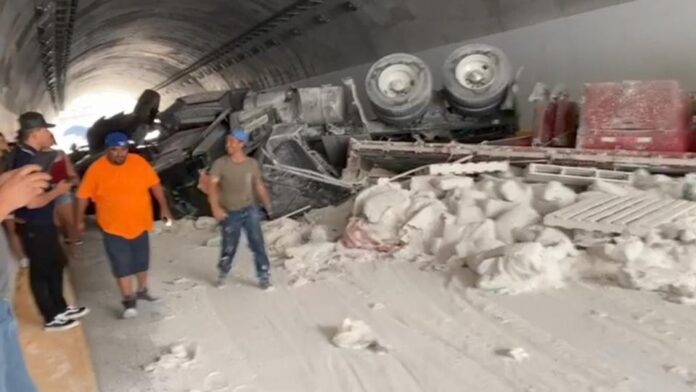 The driver of the heavy unit was reported trapped inside the cabin.

Concord, Sinaloa. — The overturning of a trailer with a double trailer in the access to the Santa Lucía tunnel heading from Durango to Sinaloa, in addition to leaving material damage, an injured person, caused the closure of traffic while the fin is being attended to.

The federal traffic event occurred in the aforementioned tunnel located at kilometer 181 + 30 of the Mazatlán-Durango Highway, the cause that generated the mishap is unknown at the moment, but the hypotheses could be carelessness at the wheel or some mechanical failure of the heavy federal cargo transportation unit.

The fact that it blocked the roadway in both directions alerted Capufe personnel who immediately took charge of flagging down the area, and attending to the driver who they helped to extract him from the cabin that was destroyed.

Elements of the National Guard Highways Division also arrived at the site to gather information about what happened and at the end of the information gathering, ordered that the vehicle be removed with a crane to widen the roadway that was damaged for a couple of hours.