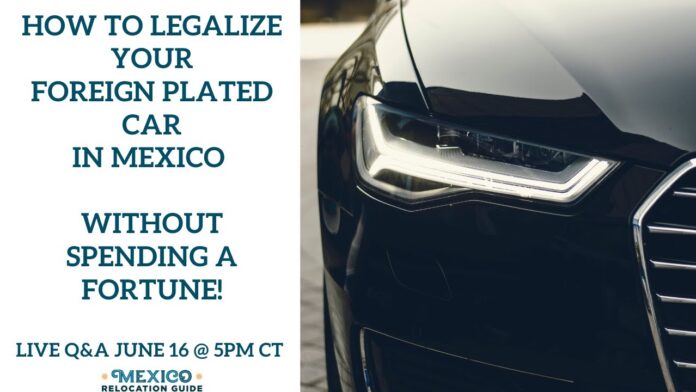 Thousands of foreigners move to Mexico every month. And more than half of them are coming in from the United States or Canada- both neighboring countries that share a road.

Naturally, many people want to be able to bring their cars with them permanently when they move to Mexico. But the current laws only allow temporary residents to bring in their foreign plated cars for up to 4 years. And permanent residents aren’t allowed to drive a foreign plated car in Mexico. So what do they do? Should they buy a car in Mexico? It’s an expense a lot of permanent residents don’t want to have to deal with. Especially if their current car isn’t worth much and financing in Mexico isn’t an option.

And importing a foreign plated car is very expensive!

Until now! Join me on June 16th at 5 pm Central with my guest Pat’s Plates from Puerto Vallarta to learn more about the current program that allows foreigners living in Mexico to legalize their foreign plated cars- without paying a fortune!

Take the guesswork out of moving to Mexico with our COMPLETE Mexico Relocation Guide https://mexicorelocationguide.com/

Mexico has a website for older adults to register for the COVID vaccine: This is how it works