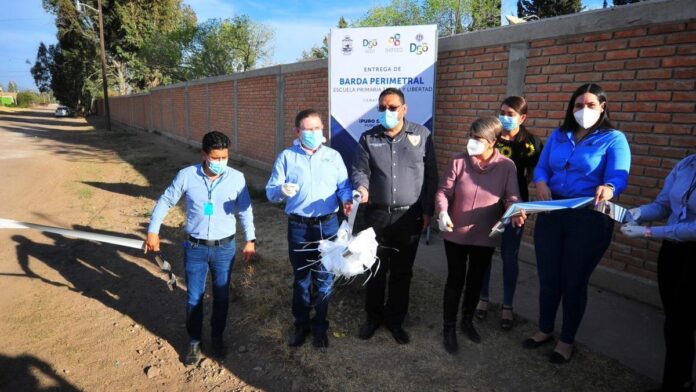 In Santiago Papasquiaro we fulfill the people with the paving of more streets, the construction of better accesses, and a linear park so that families have a better quality of life, said Governor José Rosas Aispuro Torres when starting and supervising the progress of works in this the municipal head.

All this space that for many years people could not take advantage of, today it will be in decent conditions, it will improve the urban image and can be used for families to walk, play sports and live together, said the State President when supervising the construction of the Park Lineal, the Ferrocarril boulevard and a bridge over this avenue, in addition to starting the paving of El Lago street.

With the completion of this type of works, more than 26 thousand inhabitants will be able to travel safely and comfortably, said Aispuro Torres, assuring that, with the joint work of the City Council, in addition to the municipal seat, the benefits of hydraulic infrastructure, construction of domes and housing actions, reach other communities in this municipality.

Santiago Papasquiaro has done very well with the Governor, said the municipal president, César Rivas Nevárez, who assured that the works carried out are of quality and will serve everyone. “The works are made with the greatest transparency; here weight that is for work, weight that is applied in it “, he pointed out.

During this work tour, the Governor accompanied by the Secretary of Communications and Public Works (Secope) Rafael Sarmiento Álvares, also supervised the progress of paving in the streets Palestina and Cuauhtémoc, with which significantly increases the quality of life of the inhabitants, improving basic social welfare, security and connectivity services.

As he continued his tour of the state, the State President was in Canatlán and in the company of the municipal president, Dora González Tremillo, began the paving works in Juan Manuel Flores street in the July 11 neighborhood, and in Tierra y Libertad, as well as the access road to the Municipal Pantheon; They delivered the perimeter fence of the school of the same name and right there, 50 ecological stoves, 16 Police Certificates and 3,796 school supplies.

Of great importance was the beginning of the School Furniture Rehabilitation Program in its first stage, which with an investment of 6 million pesos includes 300 elementary schools in this region of the state, benefiting more than 60 thousand students and teachers so that they can count on a renewed furniture when they return to face-to-face classes.

Aispuro Torres, referred to the Credit to the Word program, which to date, in this municipality, has been delivered to 71 beneficiaries, in support of the economic reactivation that each region requires.

In the town of Santa Lucía, they supervised the paving of the Constitución and Aldama streets, in addition to delivering the rehabilitation of the pumping station, with which the sewerage network will be improved so that the wastewater has a channel and there is no danger of leaks or stagnations.