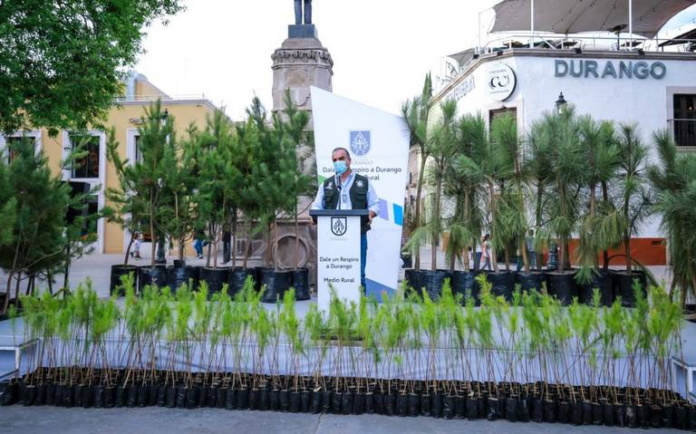 In the first stage, 210 trees were delivered in the communities of El Nayar and Morcillo, where citizens committed to taking care of them

As part of the program that began in the urban area of ​​the municipality, this time “Give Durango a breath, it also arrived in the rural area where each town will receive the donation of 210 good-sized trees that will be planted in public areas and areas.

This was announced by Mayor Jorge Salum del Palacio during the start of this program in the villages, where he stressed that the environment is more than just planting trees, “it is a joint work with society to generate results such as the creation of the Environmental Police ”.

And the fact is that there were many requests that reached the municipal offices so that they were provided with trees of good size and with this guarantee, their survival, the adoption of trees will be a social commitment to have better green areas and public spaces ” said the mayor of the capital.

For his part, the local deputy, representative of the Green Ecologist Party of Mexico (PVEM), applauded the work carried out by the current municipal administration, as it speaks of the efforts that have been made to improve the living conditions of the city’s inhabitants from Durango.

Likewise, the president of the Morcillo Municipal Board, Jessica Galarza, thanked the mayor and his work team for the provision for the rural environment to also have this type of program as it will greatly benefit the inhabitants of these localities.

Similarly, Ema Hernández Flores, who chairs the Municipal Board of El Nayar, assured that with these trees there will be a greener town and will benefit the ecology.

In this sense, the head of the Municipal Environmental Directorate, Francisco Franco Soler, reported that these 10 thousand 500 trees that are delivered in rural areas, will be to benefit the environment of society, therefore it is important to expand this program to all the communities of the municipality of Durango.