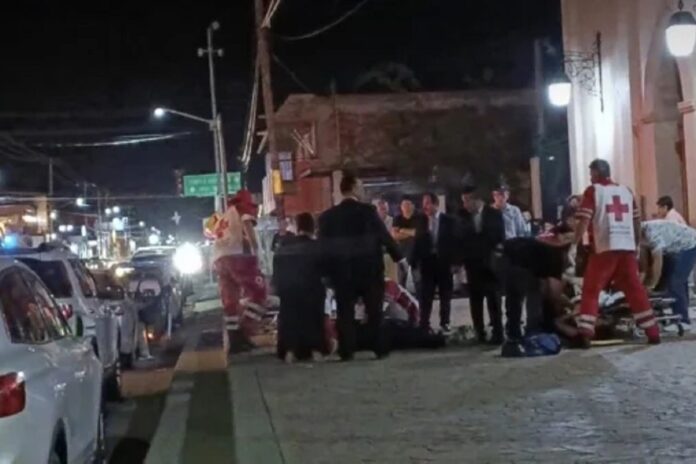 The tragedy, which occurred in Sonora, did not reach the bride, who is safe and was removed from the place by her relatives; the motive for the attack is unknown.

The groom and his sister were riddled with firearms as they left the wedding that was held at the Nuestra Señora de la Candelaria church in Caborca, Sonora; the man from Durango did not survive.

The events occurred around 5:00 p.m., outside the temple located on the 6 de Abril road in the Centro neighborhood.

The wedding guests desperately tried to give Cardiopulmonary Resuscitation (CPR) to the two people injured by the impact of a firearm while the Red Cross paramedics arrived.

The tragedy reached the bride who is safe. She was removed from the place by her relatives.

The Ministry of Public Security (SSP) confirmed that “the direct attack on a man from Durango was reported outside a church in Caborca ​​who died while traveling to receive medical care.”

In this event, a woman was injured, who is reported out of danger.

Security elements are in operation to find the person responsible, he said.

Shortly after, the boyfriend was identified by the name of Marco Antonio Rosales Contreras, 32, originally from Durango but residing in Guadalajara.

The injured woman is Michelle Adriana RC, 23, who suffered a gunshot wound to the back.

It was also said that the man was an engineer who worked in a company in the state of Jalisco and had arrived in Caborca ​​this morning with his parents and sister to celebrate the wedding with a young woman from this city.

So far the reason for the armed attack against the boyfriend and his family is unknown.

An operation of federal, state and municipal security forces was implemented to find the person responsible

The Sonora Prosecutor’s Office reported that no line of investigation is ruled out, including those that are cited in open sources on social networks, regarding the murder of a man when leaving his own wedding at the Nuestra Señora de La Candelaria church in Caborca. .

This Sunday, the Sonora Prosecutor’s Office called on society to collaborate with the investigation and facilitate the capture of the person or persons responsible.

No line of investigation is ruled out, including those that are cited in open sources on social networks.

As reported by the SSP, there is a mixed operation made up of the Ministry of National Defense, the National Guard, the Criminal Investigation Agency (AMIC), the State Public Security Police and the Municipal Police throughout the city, the State Prosecutor’s Office reported.

LIPAN TRIBE: THE MEXICAN APACHES THAT DO NOT APPEAR IN TEXTBOOKS