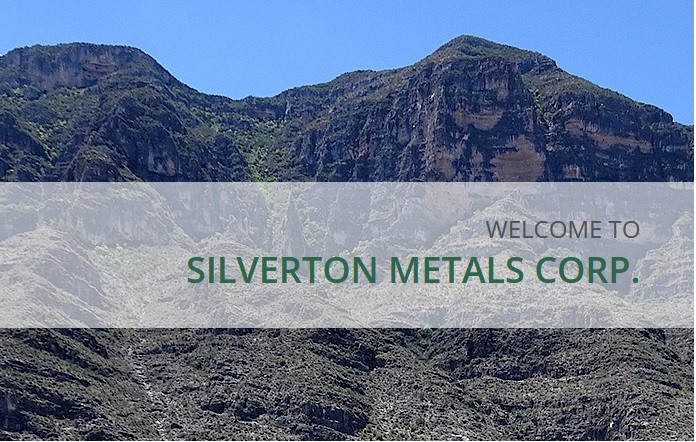 Silverton Metals Corp. announced that it has entered into a share purchase agreement with Zapata Exploration Ltd. to acquire the Margaritas Gold-Silver Property (“Margaritas”) by acquiring all of the issued and outstanding shares of Zapata’s Mexican Subsidiary, Impulsora De Proyectos Mineros, S.A. De C.V. (“Impulsora”).  The Margaritas Gold Property consists of two concessions totalling 500 hectares located in the state of Durango, Mexico.

John Theobald, President and CEO commented, “We are very excited about the Margaritas acquisition as it contains a high-grade gold vein open in all directions with visible gold and the potential to be a bonanza-grade deposit. Both the environmental permit application and community agreement process have already commenced, which have given the company a head start on the exploration of the project. Favorable topography facilitates drilling and or tunnelling and eventually would also facilitate underground mining. The simple mineralogy suggests that the gold could be easily extracted by gravity and leaching methods. We plan to rehabilitate roads, refine mapping and sampling, and get the project ready for drilling before the end of the year.”

The Margaritas Gold Property consists of two concessions, Margaritas, and Ampliacion las Margaritas, that cover a total of 500 hectares located in the southwestern corner of the State of Durango, Mexico.

Channel rock chip sampling by the previous operator report gold grades between 0.01 and 31.6 g/t and between 0.7 and 73.7 g/t in dump samples. Silver grades vary between the detection limit (<0.2 g/t) and 38 g/t in both dump and rock-chip channel samples. Visible gold has been found in pits, trenches, and dumps located along the central part of the vein.

The deposit is a gold dominant low-sulphidation epithermal system similar to productive deposits such as La Cienega, and Bacis in Durango, located 250 kilometers northwest of Margaritas. The mineralization at the Margaritas Gold-Silver Property consists of native gold and accessory silver, and gangue of silica, clays, and traces of pyrite, contained in a quartz vein controlled by a fault and fractures hosted in Tertiary rhyolites of the productive Sierra Madre Occidental. The vein has been mapped along strike for 3,500 meters; on surface the vein averages a meter wide and has a maximum width of 4 metres. Vein walls exhibit hydrothermal alteration halos that are potentially mineralized. A 2-meter-wide sample, for example, in argillized rock in the footwall of the vein, reported 1 g/t Au.