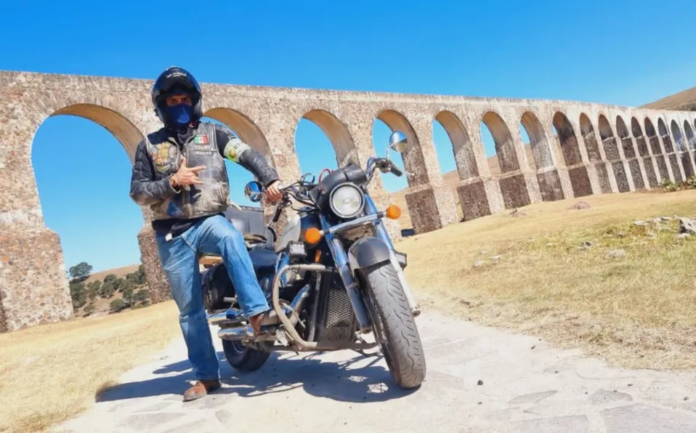 Jorge Gárate is ready to embark on a new adventure that will allow him to travel almost half a continent.

The lagunero biker by adoption, Jorge Gárate, will tour North America “From Point to Point” on his motorcycle starting next April 23, on a historic journey that aims to expand its limits and demonstrate that everyone can achieve the dream that is proposed.

This was reported at noon this Tuesday for MILENIO-La Afición, indicating that in the coming days he will announce more details of his adventure at a press conference.

Jorge, who is from the capital, but has been in La Laguna for many years, will attend the “Motorcycle Week” in Mazatlán, Sinaloa, from there he will depart on his Shadow 750cc 2019, called “La Bolena”, first, back to Torreón, where he will be a couple of days to talk with the press of the lagoon region.

Later he will go to Monclova where he will attend a mass in honor of Professor Ricardo Aguilera Venegas, a well-known rider with whom he was going to undertake this adventure, but he passed away in 2018.

“This trip was going to be done in 2018, but the teacher died that year and it was no longer done, then other things came up, the pandemic and others also went through and it was not until 2022 that it could be done,” explained Jorge.

From “Monclova la Bella”, Gárate will head towards the border, entering through Texas, passing through Dallas and going up to Houston, Dallas, through New Orleans, up through Kansas; he will continue his journey to Nebraska, passing through the two Dakotas and then cross the US border into Alaskan territory.

Once there you will climb up Dawson Creek , around the Rocky Mountains Provincial to as far away in Alaska as can be reached by motorcycle or any other land vehicle, to the banks of the Sag River.

Everything does not end there, because he will go down the entire Pacific coast through British Columbia, entering US soil once again through Seattle, going down to California , then Arizona, entering Mexico through Chihuahua .

He will be in Torreón for a couple of days to do maintenance on his motorcycle and then continue through Durango, Sinaloa, Nayarit, Michoacán;  Puebla, State of Mexico, will go up to Veracruz, passing through Tabasco, then Campeche, Yucatán and ending in Cancún, Quintana Roo.

This adventure or journey will be dedicated by Jorge to the memory of Professor Ricardo Venegas and has another purpose, “In addition to paying tribute to the teacher, it is to show that when you set a goal you can achieve it, on a motorcycle or whatever; to be able to achieve it live the dream,” he said.

He indicated that he is prepared for inclement weather and takes everything with him to camp, since much of the journey will be like this, camping in national parks. without a doubt a unique adventure.

Jorge Gárate is a biker who likes adventure, he has toured Mexico several times and this will undoubtedly be his biggest and most daring motorcycle challenge.

How far is it from Alaska to Cancun?

According to Google Maps, between Alaska and Cancun, Quintana Roo the distance is 5,717 miles, that is, about 9,200 kilometers.

Video: Wedding ends in tragedy; groom gunned down as he leaves the church