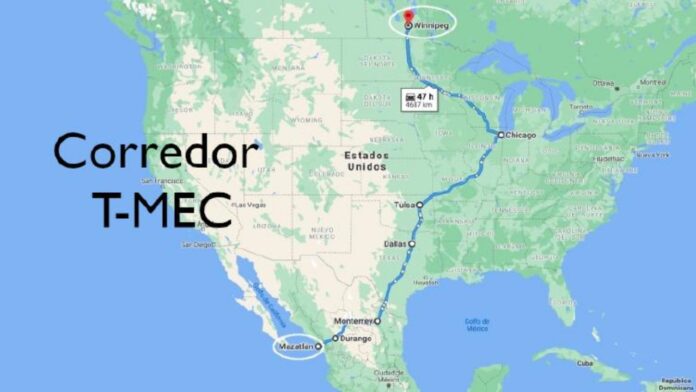 In addition, Economic Development in Durango explained that the infrastructure of the Logistics Center will be expanded.

The construction of the USMCA rail corridor, as well as the expansion of the infrastructure of the Durango Logistics Center, would leave an investment of at least 3.5 billion dollars. This is according to the Secretary of Economic Development of Durango, Gustavo Kientzle Baille.

He assured that after the said project was delivered to the federal SCT ( Secretariat of Communications and Transportation), it is expected that bids will be issued in which local construction companies will be able to participate.

Within the framework of the beginning of the 2021 Industry and Business Expo organized by Canacintra Gómez Palacio, the Lagunero official said: “The executive project of the railway port has already been delivered to the SCT with the request to go out to tender, so The three levels of government are already working ”, he assured.

How will it be distributed?

As he explained, this project represents a new port north of Mazatlán, with a railroad that interconnects with the city of Durango and the Logistics Center; in such a way that an industrial area is contemplated in the part of Lerdo, two in the exit of the municipality of Nava, Coahuila so that the exit of most of the project is through Piedras Negras towards the United States.

Logistics Center questioned by the budget

Regarding the investment that would be applied to the part of the state of Durango, Kientzle Baille estimated that it would be 3.3 billion dollars of investment, where the vast majority of the rail infrastructure will be built, since for the Logistics Center it is approximately 200 million dollars, being the most important dry port of the project.“The response from the Ministry of Communications and Transport is awaiting, which has already received the entire executive project. After the exit of the tender, it already has the group of investors to participate, but it will be until then when the dates for the start of the work come out ”.

Regarding the capacity of Durango construction companies to participate in the project, he said: “There is capacity of up to 90% by local constructors.”