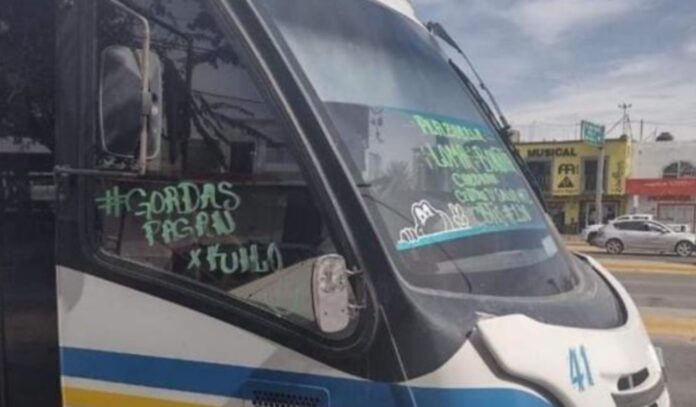 In Durango, users of social networks reported that a public transport driver placed obscene signs in their unit. The local mobility authorities have fined this driver for “mistreating users”.

A complaint about a bus circulating in Durango circulated on social media. On one side of the bus, the phrase “fat women pay by the kilo”

The insulting phrase was criticized on social networks. After the complaint was widely circulated, Durango authorities announced that they had found the unit on the night of November 10 on Dolores del Río Boulevard.

Due to the offensive sign posted on the bus, the driver received a fine for “user abuse”. In addition, the man was fined for not having a license or card.

“At 8:30 p.m. on this day, Transport Inspectors located the indicated unit, corroborated the complaint and proceeded to lift the respective infraction for mistreatment of the user, in addition to the sanction for lack of a card and license”, it reads in the post.

The Durango Undersecretariat of Mobility and Transportation accompanied the publication with a photograph of the report raised, as well as the original complaint. The authorities did not disclose the amount of the penalty imposed on the carrier.

Driving to Mexico? Learn about the Héroes Paisanos program and how does it work