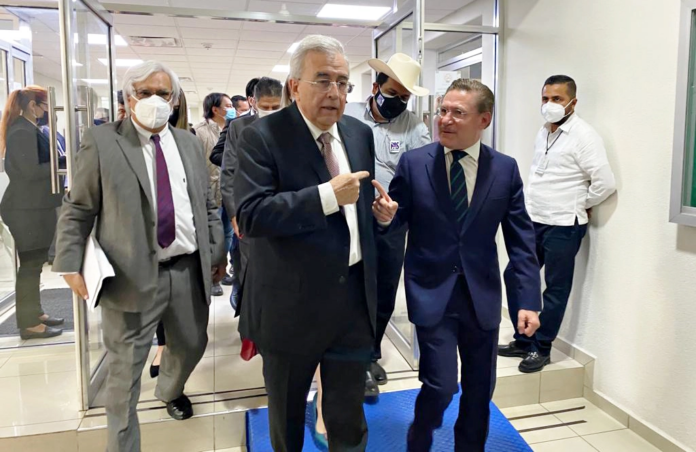 The Durango president announced that he will meet with the Governor-elect to discuss issues such as the commercial and cultural relationship, which is very broad, and above all, the USMCA corridor; the high-altitude port of Mazatlán, the missing railway section between this entity and Durango, as well as infrastructure and the logistics center.

The governor of Durango maintains good expectations of the new government in Sinaloa, predicting that great things are coming in economic, tourism and industrial matters, in addition to security

With the arrival of a new government in Sinaloa and a new cabinet, the governor of Durango, José Rosas Aispuro, will seek to strengthen ties and maintain that relationship that has characterized both states, prioritizing the issue of security with the governor-elect, Rubén Rocha Moya.

He mentioned that this is the main challenge, continue with communication and strategies in this area, improve some and go with the low incidence of crime, which in recent years has improved due to regional meetings with both states and the Third Military Region.

“The challenges are to maintain, not only maintain, but improve security, that is the most important issue to provide confidence to investment, for there to be development there must be security,” he said.

Rosas Aispuro pointed out that he has known Rocha Moya since college and although they are from different political parties, he maintains high expectations in the opening of dialogue, joint events and strategies aimed at continuing to improve between the two.

In addition to security, he indicated that there are several pending projects such as the construction of the Culiacán-Durango highway, an alternate route with Tamazula, achieving connectivity with the state capital, adding to the main highway of both, the Mazatlán-Durango highway, as well as the union that will have a railroad through the USMCA Corridor.

“The expectation is that we maintain a dialogue and permanent relationship that helps us on issues that are the most important right now … security is the most important issue to be able to develop other activities,” he declared.

The Governor of Durango reported that he will attend the Rocha Moya protest and will propose a security meeting right there to start with the strategies, see what has worked, what has not, and with that improve on it.

With Quirino in Spain, it will be possible to boost tourism in the region

After the invitation of President Andrés Manuel López Obrador to Quirino Ordaz Coppel to leave as Ambassador of Mexico in Spain, he said that this could help and enhance international tourism in the region.

“It’s good that we are going to have the opportunity to open at the tourism fair and that is a good communication bridge, not only promoting tourism but also investments in other types of economic activities,” he added.

In addition to the above, there are operational strategies, where there is good coordination between the prosecutors, following clear protocols that have allowed the relationship to be better between all the institutions maintaining good communication and what has allowed to have a safe area in addition to the reduction of crimes.