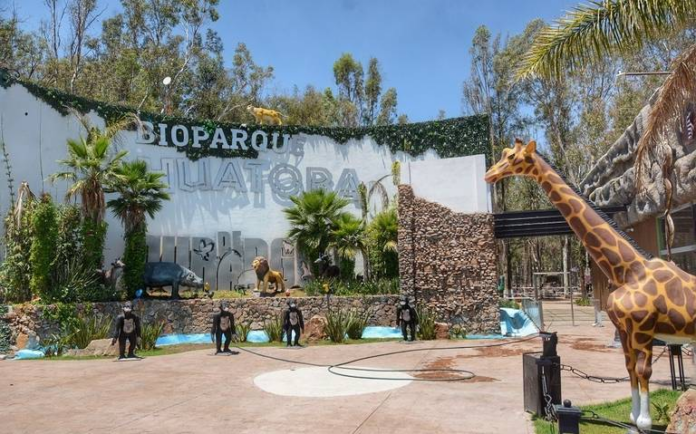 As a community and civil society, we must all contribute, have a conscience, and a civil commitment for the conservation of the environment in Durango and of spaces such as the Sahuatoba Zoo, in favor of present and future generations.

By taking protest as president of the Consultative Council of the Municipal Wildlife Conservation Institute, in which other professionals committed to caring for our habitat also participate, we will make the participation of citizens heard as a fundamental aspect in making decisions that contribute to the care of the flora and fauna of Durango.

One of the greatest threats that species have to deal with is the deterioration and loss of their habitat, through the protection of the places where animals live and the construction and maintenance of these spaces, we are protecting their life and life on the planet, so the work of Mayor Jorge Salum del Palacio and the director of the Municipal Institute for Wildlife Conservation Juan Emilio Camacho Rocha to positively transform the Sahuatoba Zoo is significant, especially during these times of the pandemic.

In addition, several animal births are expected this year, such as the dromedary female, the bear, the antelope deer, and the canines, in addition to the other pair of Canadian wolves, with which these births are added to those registered in 2020.

Basic natural resources and ecosystems must be managed sustainably in order to meet the population’s food demand and other environmental, social, and economic needs. Climate change, increasing water scarcity, and conflicts over access to resources are all elements that pose challenges to environmental sustainability and food security.

Although it is difficult to predict the total impact that the loss of a species could cause on the planet, this fact could lead to disastrous consequences in the ecosystem, triggering reactions that would affect other species, because the fate of all species in the planet, including that of the human being, are linked to each other; everything is united. Each species has its role in the ecosystem, is part of a network of species, and contributes that irreplaceable grain of sand in the world.

The union of all these species forms an extraordinary result that allows us to live the way we do and the lack of these threatened granites, endangered species, would alter food chains and ecosystems, which would ultimately imply an inescapable imbalance for the health of the planet in general and for our well-being in particular.

In this same session of the Board of Directors of the Municipal Wildlife Conservation Institute, the name change from Bioparque to Sahuatoba Zoo, as it is known and which is technically correct, was approved.

With the provisions of the yellow traffic light, this attraction opens its doors from 10:00 a.m. to 5:00 p.m. and will be able to receive between 300 and 400 people

After being closed due to the pandemic for almost eight months, the Sahuatoba Zoo or Biopark of the city of Durango, opened its doors to the public, although with restricted capacity and hours as established by health authorities, after the traffic light was decreed. yellow informed the director Juan Emilio Camacho.

After the recent change of the epidemiological status in the entity that broadens the range of activities allowed, this traditional local attraction has been reopened to visitors, although a capacity of up to 50% is allowed, which means between 300 to 400 people as explained by its director.

He asserted that they opened last Thursday and work from 10:00 a.m. to 5:00 p.m., with mandatory use of the mask, as well as taking the temperature and applying antibacterial gel at the entrance of this property. They comply with all sanitary measures in order to give certainty to their visitors.

He acknowledged that there will be no age restrictions to allow access, however they will be very careful that all health protocols are followed.

Finally, he indicated that the opening of this Biopark is part of the agreements of the health authority since the range of activities that are allowed is broader, he said.