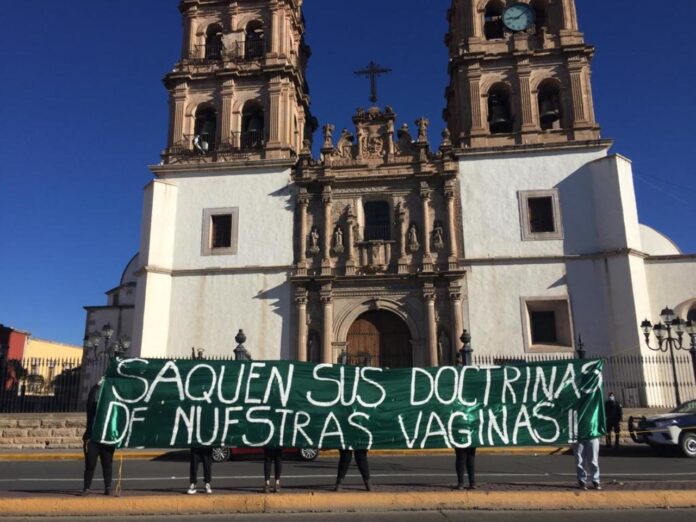 Towards March 8, feminist groups demonstrated in front of the Cathedral to demand rights, considering that they cannot be accessed freely “thanks to the ecclesiastical system that continues to be an authority.”

This Sunday, Family Day, they demanded that the church and its doctrines cease to have power over their bodies, in addition to free and safe abortion for the women of Durango.

The demonstration takes place on the eve of International Women’s Day, which is commemorated tomorrow, March 8, on Avenida 20 de Noviembre.

The State Institute of Women (IEM) will carry out a series of activities to commemorate International Women’s Day, on March 8.

This was indicated by Laura Elena Estrada Rodríguez, director of the agency, who reported that the virtual conference will be held via zoom “Women in Today, Advances and Challenges.”

This will be taught by teacher Aurora Aguilar Rodríguez, General Director of the Center for Studies for the Achievement of Gender Equality of the Congress of the Union.

The transmission will be next Monday, March 8, at 5:30 p.m., through the social networks of the IEM, so all women are invited to be part of this analysis.

On the other hand, he announced that on March 9, through the Institute’s own social networks, a cultural marathon will be held in connection with the Institute of Culture of the State of Durango (ICED), in which there will be singing , poetry and plays.

In addition, the economic empowerment workshop “Set up your virtual business, fast and with little budget” will be held, given by Adriana Barrón, creator of multimedia content, with the aim of supporting women in the economic sphere, providing them with tools that allow them to get ahead.

There will be the placement of the banner “United we are stronger”, messages of sisterhood that the women participating in the keynote address on March 8 will issue.

The blanket will be installed in the Plaza Fundadores on March 11 at 11:00 and will remain until March 19.