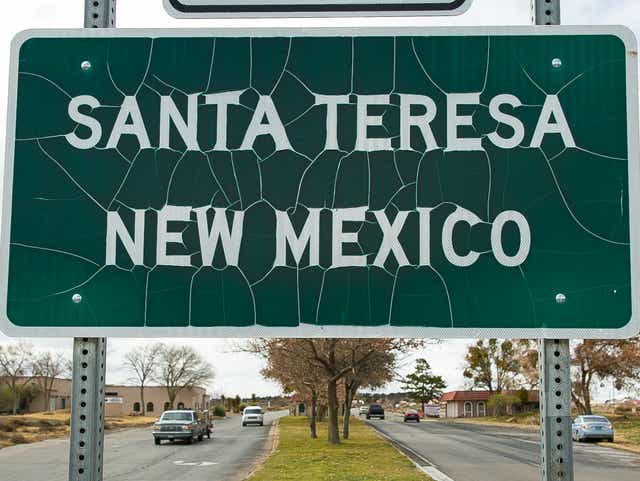 Texas Governor Greg Abbott’s border crackdown on Mexico is drawing a rebuke from the Mexican Secretary of the Economy, who announced that the new rail line to the United States would now pass through New Mexico and not through the Lone Star State.

“I think we are not going to use Texas now,” Economy Secretary Tatiana Clouthier said at a conference Thursday in Mexico City, referring to plans for the rail and port expansion known as the T-MEC (USMCA) Corridor to connect the port of Mazatlan on the Pacific with the Canadian city of Winnipeg.

“We cannot leave all our eggs in one basket and be held hostage by those who want to use trade as a political measure.”

Clouthier’s message was clear: Mexico is upset by the chaos that Abbott’s surprise order to force commercial carriers coming from Mexico to submit to additional inspections caused at the border a couple of weeks ago.

While Texas officials did not uncover any contraband or undocumented immigrants, they created hours-long delays that left fresh produce to rot and wreaked havoc on supply chains and caused billions in losses.

The USMCA Corridor will have modifications that will impact the economy of Texas and Mexico, by not considering the United States entity in the railway project.

It was recently confirmed that the Federal Government announced that there will be modifications to the USMCA corridor, its plan to build a commercial train connection with a route that goes from Mazatlán, Sinaloa, to Winnipeg, in Canada.

Said modifications consist of changing the railway connection with Texas and instead building it on the border of the entity with New Mexico, this due to the revisions ordered to truck boxes in different border ports that caused long lines, delays in deliveries, loss of merchandise and other damages estimated at 4 billion dollars.

This modification would mean a blow to the economy of the transportation sector in Texas, and it is expected that this will affect the future investments of the Mexican Government with that of the entity in the southern United States.

If this is the first time you have heard about the USMCA Corridor, or you are not very clear about what it is about, here we will tell you a little about the project.

What is the USMCA corridor and where does it go from?

According to information from the Government of Sinaloa, the USMCA Corridor is a logistics work that hopes to connect entities in Mexico, the United States and Canada from Mazatán to Winnipeg.

This work also contemplates integrating infrastructure projects, such as a connection between Sinaloa with Durango through the railway and a cargo port in Mazatlán.

The master plan for the project was presented in March 2021, which was said to consist of more than a thousand kilometers of land routes, in addition to the rehabilitation of ports, airports and industrial and logistics centers.

What progress has the USMCA Corridor had?

The UMCA Corridor is a long-term project, as Carlos Ortiz, CEO of Caxxor Group, the company in charge of construction, has said.

After presenting the master plan in March 2021, in December of the same year, it passed to the Congress of the Union for review. It is expected that in the second half of 2022 it will have the approval of the Federal Government, according to statements by Carlos Ortiz.

It is estimated that the first advance of the work will be ready by 2024, with an investment of 3.300 billion dollars.

Why will the USMCA Corridor no longer pass through Texas?

After the border inspections that meant a “blockade” implemented by the governor of Texas, Greg Abbot, the freight transport sector suffered heavy economic losses. This caused the Mexican government to take action and is now considering excluding Texas from the USMCA Corridor.

Abbot’s reasons worked around the crossing of migrants and drug trafficking, hence the intention to increase inspections.

Tatiana Clouthier, Secretary of the Economy, said that “there is an important project that I am sure will begin to be carried out very soon that connects from Sinaloa, and I was saying to Texas, but I think we are no longer going to use Texas; We are going to find that it connects to New Mexico, because we cannot leave our eggs in one basket and be hostage to those who want to use trade as a political measure,” said the Mexican official, referring to the Abbott order imposed in April.

Video: Wedding ends in tragedy; groom gunned down as he leaves the church

LIPAN TRIBE: THE MEXICAN APACHES THAT DO NOT APPEAR IN TEXTBOOKS