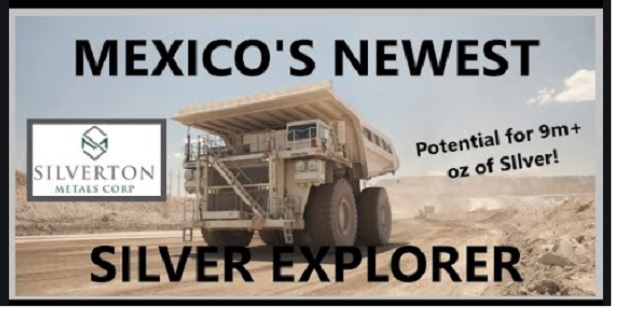 VANCOUVER, BC, Sept. 27, 2021 /PRNewswire/ — Silverton Metals Corp. is pleased to announce the commencement of exploration at the Pluton silver-zinc-lead project in the state of Durango, Mexico.

The Pluton property is within the prolific carbonate replacement, gold, silver, zinc, and lead Ojuela-Mapimi Mining District in northern Durango, Mexico. The property covers 6,534 hectares and is located near Excellon Resources’ Platosa mine, one of the highest-grade silver producers in Mexico. In the first six months of 2021, Platosa grade was 506 g/t silver with a silver equivalent metal production of over one million ounces1. Not only does Pluton share a similar geological environment to Platosa, but it also lies along strike from the past-producing La Ojuela mine, historically one of the richest silver mines in Mexico and one of the first mines developed by Peñoles in the late 1800s.  La Ojuela was in production for over 350 years. Exploration targets at Pluton are Platosa and Ojuela style silver-lead-zinc manto and chimney carbonate replacement deposits (“CRD”), which may lie beneath the shallow alluvium and strongly altered clastic rocks that overlie the productive carbonate rocks.

Mr. John Theobald, President & CEO of Silverton comments, “I am very pleased to start working on Pluton, the district is a major hydrothermal system with favorable lithologies, structure, alteration, and widespread mineralization yet despite this remains relatively unexplored. Pluton is a district-scale project targeting high-grade carbonate replacement type silver-zinc-lead deposits which are typically in the range of tens of millions of tons such as the Santa Eulalia mine in Chihuahua and represent robust exploration targets. The nearby Platosa mine is Mexico’s highest-grade silver mine with a silver-equivalent grade of over 1,000g/t2.“

Aeromagnetic and ZTEM surveys show that Pluton, Platosa, and the Ojuela-Mapimi district lie in close proximity to a 25 km x 10 km area of intrusions that do not outcrop. The aeromagnetic and ZTEM results along with geochemical and IP surveys identified five targets and resulted in a 3900m nine-hole diamond drill program in 2011. All holes encountered silver-lead-zinc mineralization in veins in an altered shale (hornfels) that overlies the carbonate horizon which hosts the along-strike extension of the Ojuela mine. None of the holes were drilled deep enough to intersect carbonate rocks. The vein mineralization discovered is interpreted as leakage into the nonreactive shale hornfels and is potentially connected to mineralized bodies in the carbonate rocks below. The high-grade target of silver-rich massive sulfides could lie at the contact of the limestone and the downward projection of the mineralized fractures seen in the hornfels. An ancillary advantage to the district is that the Peñoles Torreon smelter is only 50km away, and transport and power infrastructure is excellent.

Silverton will focus on the Dos Amigos target in the north of the license area and San Jose in the south (Figure 1). Initial work will include three-dimensional modeling of geophysical data as well as seismic and gravity surveys to rank targets to be tested with drilling. Mineralization at the Platosa mine and La Ojuela mine, however, are not necessarily indicative of mineralization at the Pluton property.

Silverton Metals Corp is a Canadian company focused on the exploration and development of quality silver projects. The company holds a 100% interest in three significant silver assets in Mexico – Pluton, in Durango, Peñasco Quemado in Sonora and La Frazada in Nayarit. Silverton management and board have extensive experience identifying and evaluating acquisition targets and exploration prospects. The company intends to build a strong portfolio of silver and gold-silver projects to drive future growth by exploration success and from later stage projects with production potential. To achieve this growth the Silverton business plan calls for a dynamic combination of the development of its existing properties, acquisitions, and partnerships.