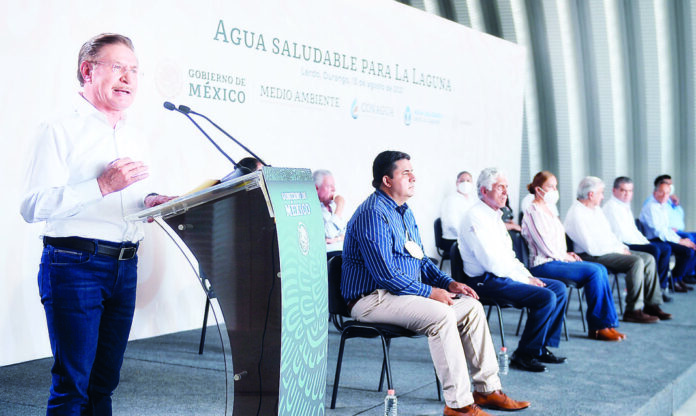 Lerdo, Durango.- With the political will of President Andrés Manuel López Obrador, of the Governments of the States of Coahuila – headed by Miguel Ángel Riquelme Solís and Durango, as well as the Municipal Governments, we are ready to carry out the Water project Healthy for La Laguna; This was stated by the state leader José Rosas Aispuro Torres, at the meeting led by the federal Executive in that city, to review and address the concerns about this great work.

The governor of Durango pointed out that it is a desire of the lagoons to be able to have quality and quantity water, given the water crisis that has worsened in the last seventy years, a situation that every day reduces the life of the main aquifer and the quality of life of the lagoons.

The president of Mexico, Andrés Manuel López Obrador recognized the work that the Governments of Durango and Coahuila have been carrying out together with the National Water Commission (Conagua), and urged all parties to conciliate and offered to open the necessary mechanisms so that all are heard.

“I propose that on October 3 we meet again and that in this previous time, the state and municipal governments, Conagua, the producers and environmental associations, carry out an orderly debate, that everyone be heard, that they inform well and after a reasonable period, let us decide among others; make commitments and that the demands of the peasants are viable and fair, ”declared López Obrador.

In his message, Aispuro Torres endorsed his support and that of her Government to carry out this Healthy Water project for La Laguna; And in the same way, he reiterated that his government will add to address well-founded concerns and continue open to dialogue to build agreements for the benefit of all Durango residents.

For his part, the governor of Coahuila, Miguel Ángel Riquelme Solís agreed that this work would benefit thousands of inhabitants of this thriving region; “Here nothing has ever been easy; I have witnessed the vicissitudes that fundamental projects have faced for the promotion and development of the Comarca Lagunera, in all cases voices have been raised for and against, but always the differences and adversities have been overcome and now those projects mark the regional history ”.

He indicated that Healthy Water for La Laguna will provide the necessary infrastructure to take advantage of the runoff from the Nazas River, benefiting one million 600 thousand people; He commented that the historic opportunity to solve the problem that most concerns our people should not be missed.

He explained that according to scientific and technical studies, the water in this area has a high concentration of arsenic that generates serious health problems, including cancer, even today the damage it can cause to the nervous system of people is being investigated, hence the importance of this project crystallizing.

He recognized that with the consensus of all social actors and with a sustainable vision so that while the supply of water for the population is guaranteed, the rights of the users of the dam’s water are also preserved. “The state and municipal governments will work to improve the hydraulic infrastructure, and in turn, I call on the entire population to make rational use of water; it is the most valuable natural resource that humanity has ”.

In his speech, Germán Martínez Santoyo, General Director of the National Water Commission (Conagua), explained that Healthy Water for La Laguna is a project to guarantee quality and quantity water to nine municipalities in the Region; Gómez Palacio, Lerdo, Mapimí and Tlahualilo, Durango; and Torreón, Francisco I. Madero, Matamoros, Viesca and San Pedro, Coahuila; benefiting 1.6 million people who live here. It is a comprehensive project of the federal government in which 10 billion pesos will be invested from 2021 to 2023.