Civil organizations warned that despite the discussion, the criminalization of users continues since it allows them to be criminally and administratively prosecuted

In Mexico, the Senate approved in general and in particular the regulation of recreational personal use of marijuana throughout the country. However, the discussion generated controversy, due to what it allows, the modifications that arose on this issue and the crimes that remain in this regard.

With the approval of the opinion – sent to the Chamber of Deputies to continue with its legislative process – the General Law for the Regulation of Cannabis is issued, the Mexican Institute for the Regulation and Control of Cannabis will be created, in addition to being modified, reformed and will add several articles of the General Health Law and the Federal Penal Code.

After this decision, it was expanded from six to eight psychoactive cannabis plants per person, which must remain in the home or house of the user for their personal use.

The requirement for consumers to have physical barriers with which to prevent other non-consumers from inhaling the smoke was eliminated, in addition to the power that the Public Ministry had to carry out home searches on registered consumers. 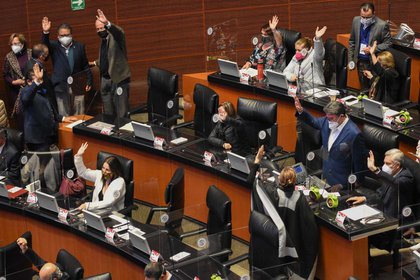 People can carry up to 27 grams. Starting at 28 grams and up to 200, the new legislation includes financial penalties. It will be above 200 grams that the penalties represent the jail.

Administrative penalties can range from 5,200 Mexican pesos (about 255 USD) to almost 261,000 pesos (about 13,000 USD), as well as the closure of associations where the consumption of marijuana will be allowed.

Is marijuana smoking allowed in public spaces, indoor workspaces, public or private, in universities and institutions of higher education as long as they are exclusive areas, which should be in the outdoors.

At home, it can be freely consumed as long as there are no minors. On the other hand, recreational cannabis consumption clubs may be created, with a minimum of 20 and a maximum of 50 members, all of them over 21 years of age. It will even be possible to create plant production cooperatives for its members (maximum 150). 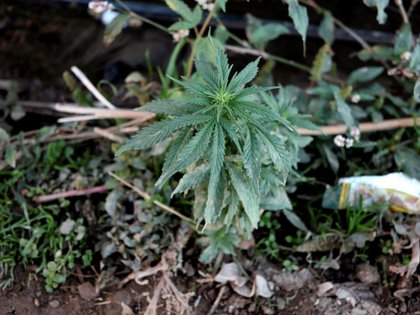 The creation of the Mexican Institute for the Regulation and Control of Cannabis was also established, which will be a decentralized body of the Ministry of Health. This will have a general director who will be freely appointed and removed by the head of said agency.

The sale will only take place in specific establishments and marijuana, its derivatives and accessories may be marketed, while drugs with this compound will be limited to pharmacies.

On the other hand, what is not allowed is to smoke in front of minors, to do it in private and public schools of basic and upper secondary education, not in spaces 100% free of tobacco. The sale of loose marijuana cigarettes will also be prohibited, as well as driving dangerous vehicles or machinery under the influence of cannabis. 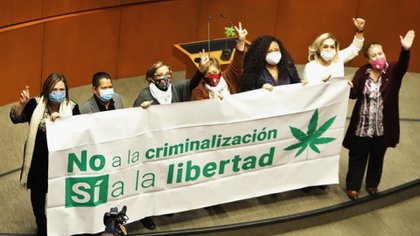 Although one of the last-minute changes in this discussion established the release of people prosecuted or sentenced for simple possession and the elimination of their criminal records within a period of six months from the entry into force of the decree, civil organizations such as Mexico United Against Crime criticized the Senate, as its decisions will continue to penalize consumers.

“The approved law enables a market that allows companies to produce and commercialize cannabis, but which penalizes and monitors who is going to consume it. Under this scheme, Mexico would be the first country to create a regulation for the adult use of cannabis and, at the same time, the prohibition continues, ”they said in a statement.

In the document, they also highlighted that the criminalization of users is maintained, since all those who possess 28 to 200 grams of cannabis are allowed to be criminally and administratively prosecuted even when they have processed a permit.

“With this, the incentives are maintained for the authorities to continue pursuing this conduct, opening spaces for extortion and criminalization, ” they pointed out, in addition to highlighting that the law continues to “penalize the poor and benefit only a few by allowing products to be developed. specific that will result in a market accessible to few people, in exclusive and privileged areas ”. 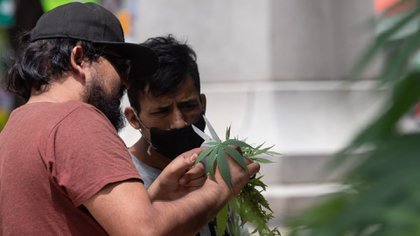 Specifically, this organization pointed out that the regulation is exclusive and will continue to affect the unprotected people, such as the ” peasantry, patients, users from the poorest areas of the country, young people and criminalized women .”

Tania Ramírez, a member of Mexico United Against Crime, also pointed out in a Twitter thread that these decisions will harm cultivating communities, since “they must meet the same requirements as transnationals, including expensive mechanisms for theater and traceability that, coincidentally, Canadians and gringas have already developed ”.

He also commented that the industry will benefit, since the locks to vertical integration would be removed, which would result in its presence throughout the chain without restrictions. “In practice, a handful will dominate the market and it will be a nice oligopoly, ” he said.

However, he stressed that the law must still pass through the Chamber of Deputies, where it is expected that the course around the decisions that were made will be corrected “so as not to lose this historic opportunity .”

Durango, among the states of Mexico most affected by malaria