In the last 24 hours, 5,860 new infections and 635 new deaths from coronavirus were recorded in Mexico

The number of confirmed infections by the new coronavirus exceeded the one million barrier in Mexico. By surpassing this figure with 1,003,253 accumulated cases, the deaths caused by the disease, since the pandemic reached the national territory, reached 98,259, according to the Ministry of Health.

And it is that in the last 24 hours there were 5,860 more cases of coronavirus and 635 new deaths; while since the first infected in the country was registered, 745,361 have been recovered and a total of 2,604,659 tests performed.

During the daily technical cut on the advance of COVID-19, Ricardo Cortés Alcalá, General Director of Health Promotion, reported that the estimated curve of estimated cases from the week prior to the current one, there is a decrease of 11%.

The specialist added that active cases only represent 4% of total infections , that is, only that percentage has presented signs and symptoms of the disease in the last 14 days. “This is very important because of all this million people, in reality, it is currently estimated that 52,131 are sick ,” he said. 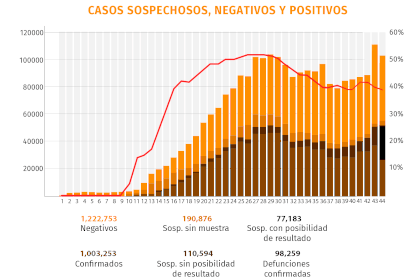 In this sense, Mexico City and Nuevo Leon are the entities with the highest number of active cases, followed by Guanajuato, Querétaro, Coahuila, Durango, State of Mexico (which is up one position today), Jalisco and Zacatecas, such as entities with more than 1,000 active cases and which together account for 65% of active cases in the country.

In contrast, Campeche and Chiapas are the entities that register the lowest number of active cases, having 40 and 35 infections, respectively; However, Campeche is the only entity that has successfully maintained the epidemic risk green traffic light.

We must not forget the first 10 entities that accumulate the highest number of cases are Mexico City, State of Mexico, Nuevo León, Guanajuato, Sonora, Veracruz, Puebla, Coahuila, Jalisco, and Tabasco, which together make up about two thirds ( 62%) of all accumulated cases registered in the country. 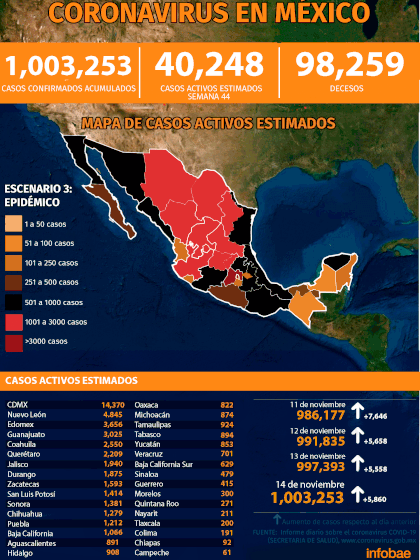 Regarding deaths, it should be remembered that so far this year, COVID-10 has ranked as the fourth leading cause of death in Mexico, behind heart disease, diabetes and malignant tumors.

In this context, compared to the previous week, the epidemic death curve showed an increase of 3%. However, there is still a 45% decrease compared to epidemiological week 28, which is when a greater number of deaths caused by SARS-CoV-2 were reported.

Until yesterday, there were 15,567 suspected deaths from COVID-19, including those pending by laboratory (n = 2,598) and those that are in the process of association with clinical-epidemiological judgment (n = 12,969) in SISVER.

They continue to rank the City of Mexico, the State of Mexico, Veracruz, Puebla, Jalisco, Nuevo Leon, Baja California, Sinaloa, Guanajuato and Sonora as the 10 entities that have registered the highest number of deaths, which together account for more than half (62.1%) of all those in the country. 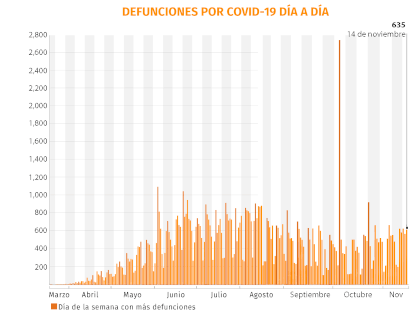 The maximum occupancy reached is 18,223, while the minimum is 9,927. Until this November 14, 12,887 beds were inhabited, which means a decrease of 29% compared to the previous accounting.

“Fortunately, the occupancy of beds with a ventilators has not had a notable upward trend in recent days, and in general, although the generality has differences between entities, we have a total occupancy of 33%,” said Cortés Alcalá. 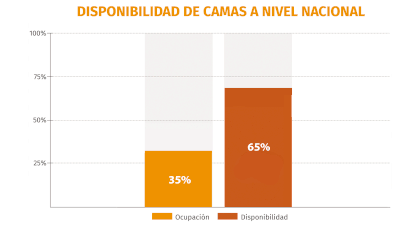 Meningitis: 7 arrest warrants issued against managers and owners of hospitals in Durango